The Windy City is famous for a number of things: the Willis Tower, jazz, proximity to Lake Michigan, Wrigley Field, the Chicago Bears, the Bean, and so much more. However, perhaps one of its most famous attributes (in our completely unbiased opinion) would be Chicago deep-dish pizza and all of the history and cheesy-goodness that comes along with it! Read on to learn about the history of this beloved dish.

A Brief History of Pizza Itself 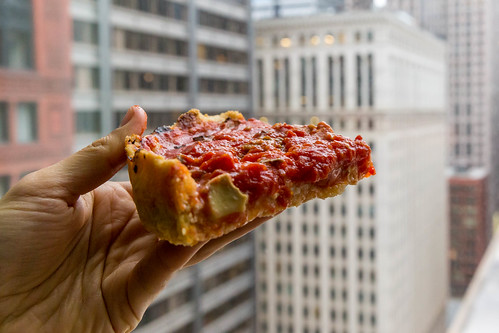 Here is an overview of how pizza evolved over the centuries:

Pizza in the Ancient World

So, what is pizza, and where did it come from? Well, the earliest record of pizza occurred as early as 600 B.C. — if not even before that — in the form of flatbread. This flatbread would often be topped with herbs, vegetables, and oils. This was a desirable meal option for several different cultures, including the ancient Egyptians, Romans, and Greeks.

In the 1500s and 1600s, Italy was introduced to tomatoes by trade merchants from the New World. At first, people didn’t know what to make of these plants and thought the tomatoes were poisonous berries, but the poorer population began to use them as a food resource. They would often bake them into their bread and other dishes. Soon, tomatoes became a staple part of the Italian diet.

Later on, in the 1700s in Naples, Italy, the Neapolitans cultivated a recipe for what we know now to be pizza. Interestingly enough, pizza was considered a poor man’s meal. Naples’ poor, also called the “Lazzaroni” in Italian, lived close to one another near the water and worked long hours each day.

This meant that they needed cheap, easy food options to keep them fueled during the day. They, like the ancient cultures, had developed a liking for flatbread with toppings. During the day, street vendors would prepare and sell slices of flatbread, typically topped with anchovies, tomatoes, oil, garlic, and cheese.

Have you ever wondered how the Margherita pizza got its name? It may be surprising, but it’s not named after the cocktail. Instead, it got its name from Italian Queen Margherita after she and King Umberto I paid a visit to Naples in 1889. There, they visited Pizzeria Brandi, and she tried a type of pizza called “Pizza Mozzarella.” She liked it so much that the restaurant renamed it to the now-classic “Margherita.”

1905 was when the first recorded pizzeria — in the form of a street vendor — opened in America. Gennaro Lombardi ran it in Manhattan, and it’s still in operation today! Throughout the early 1900s, Italian immigrants with a passion for cuisine continued to open up pizzerias in several East Coast cities, and, over time, the popular dish began to spread westward into Midwestern cities like Chicago.

This occurred during the 1880s when groups of Italian immigrants began heading west from the East Coast. The primary reason for this was the need for jobs, and since Chicago had an abundant factory industry, this was the perfect place for working-class immigrants to go.

What Is Chicago Deep-Dish Pizza?

Chicago deep-dish pizza, also called Chicago-style pizza, is pizza cooked in a pan instead of a baking tray or pizza peel. Due to it being cooked in a pan, diners enjoy a whopping layered concoction that rivals typical pizza in sheer height alone. It also has a thicker crust, which almost makes it resemble a pie of sorts. Additionally, Chicago deep-dish pizza rearranges the typical layering of toppings you’re used to.

This is because it is much thicker than regular pizza, so the cheese and other toppings would likely burn if left too long to sizzle in the oven. For this reason, you’ll find the tomato sauce as the top layer, not the cheese! As for the rest of it, you can get pretty much whatever you like — there are plenty of different types of cheese, sauces, meats, vegetables, and other toppings to meet your fancy.

The most popular combination is the deep-dish cheese pizza, which differs from your average slice by adding a layer of olive oil, a few inches of melted cheese, and chunky tomato sauce.

You might be wondering, why is Chicago attached to the deep-dish pizza title? That’s because it was invented here and loved by so many. Ike Sewell and Ric Riccardo invented Chicago deep-dish pizza. These two used their love for business and Italian cuisine and opened Pizzeria Uno in Chicago in 1943.

From here, they began experimenting with a more Americanized version of pizza, something more substantial than the average thin slice that pizza had been known for since the time of flatbread and oil. After Sewell and Riccardo perfected their inverted pizza creation, it became a major hit in Chicago, and the trend spread to neighboring pizzerias across the city and, eventually, the entire country.

In a reflection of ancient customs, the idea for deep-dish stemmed once more from poorer, working-class needs combined with a lack of necessary ingredients due to World War II. People would make a dough of sorts with what they had, adding leftover food and anything else they could think of to create a pie-like substance.

Who Else Has Adopted Deep-Dish Pizza?

Pizzerias in Detroit, Michigan, took on their own adaptation of the original deep-dish called Detroit-style pizza. This style is typically baked in a square pan instead of a round one, and it has a lighter crust with an exterior crunch. Similar to Chicago-style pizza, Detroit takes on an inverted approach as well, layering the cheese before adding tomato sauce.

Sticking by our Chicago roots, Pequod’s Pizza has served deep-dish slices since 1970. We put an extra twist on ours by adding a caramelized crust and a ton of customizable toppings.

Stop by our Chicago location on North Clybourn Avenue or our Morton Grove location just 30 minutes outside of the city to get a taste of this historic staple and all of its delicious flavor combinations. We look forward to crafting our deep-dish specialty for you to enjoy with your family and friends.