The Meaning Behind the Chicago Flag 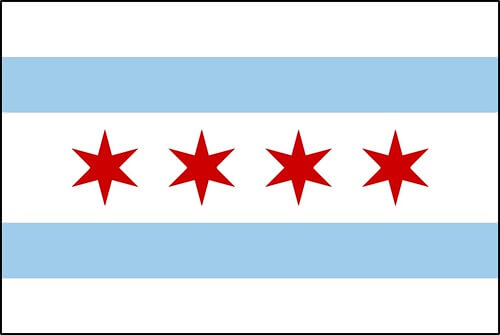 The city of Chicago’s flag has been proudly representing Chicago for over 100 years. It’s seen on hats and T-shirts and even tattooed onto the bodies of proud Chicagoans. It’s one of the most recognizable trademarks of Chicago, but do you know what it actually means?

How the Chicago Flag Was Chosen

Poet, lecturer, and author, Wallace Rice, was selected by the committee to develop rules that would govern the open competition for designing the new Chicago flag. Over 1,000 entries were submitted for the contest, with the committee ultimately choosing a flag designed by Wallace Rice himself in 1917.

Rice’s flag consists of three main components: white stripes, blue stripes, and red stars. Each of these components has a special meaning and signifies an integral part of Chicago’s geography and history.

The Symbolism of the Chicago Flag

The Chicago flag is made up of five alternating white and blue bands and four red stars. Each of the bands has a special local, national, and terrestrial meaning, while every star represents an important event in history, with each point adding more to the story.

The original Chicago flag had only two stars on it; the other two were added over time. While the intended meaning for the first two stars is part of official Chicago City Council records, the meaning of the third and fourth stars are unofficial.

The color white signifies the union of all colors and symbolizes the coming together of all races found in Chicago. The three white bands each have a unique meaning:

The blue signifies the colors of rivers and lakes, distant mountains, and oceans. Like the white bands surrounding them, each of the blue bands holds a special meaning:

The first star on the Chicago flag represents the Great Chicago Fire of 1871. The six points of this star signify ideas of excellence that Chicago holds dear, including:

The second star on the Chicago flag represents the World’s Columbian Exposition of 1893. The six points of this star signify Chicago’s spiritual ideals, including:

The third star of Chicago’s flag was added in October 1933, commemorating the Century of Progress International Exposition of 1933. The six points of this star signify:

Chicago’s flag’s fourth star was added in 1939 as a way to honor the Fort Dearborn Massacre. The six points of the fourth star refer to the development and history of the Chicago territory, including:

Controversy surrounded the fourth star of the Chicago flag, with many Chicagoans feeling that is was disgraceful to honor the Fort Dearborn Massacre.

A much-discussed topic over the years is the possibility of adding a fifth star. Historical moments offered up as possible fifth-star nominees include:

However, the inspiration to stitch a five-star Chicago flag didn’t happen until the death of Chicago’s longest-serving mayor, Richard J. Daley, fondly called “Boss Daley,” in 1976. When local chatter seemed to predict a sure bet of a fifth star being added, South-Side flag maker, William George Newbould, took it upon himself to redesign the Chicago flag. His hope was to secure the bid and have flags available as soon as the proposal passed. However, the proposal was turned down.

The most recent proposal for the fifth star arose in May 2020 when Mayor Lori Lightfoot called for a new star to commemorate the coronavirus pandemic.

Perhaps just as famous and recognizable as the Chicago flag is Chicago’s own deep-dish style pizza. We can’t tell you if and when a fifth star may be added to the flag, but we can guarantee some of the best deep-dish pizza around at Pequod’s Pizza.